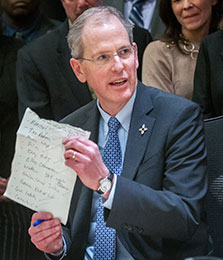 Senator Peter Wirth (D-Santa Fe - 25) is a fourth term state Senator and the Senate Majority Leader. He serves on the Senate Judiciary Committee and the Senate Conservation Committee. He spent four years as a Representative in the State House from 2004 through 2008.

Peter’s New Mexico roots go back several generations on both sides of his family. His maternal grandfather, John Gaw Meem, was one of New Mexico’s preeminent architects and first came to New Mexico in 1920 to recover from Tuberculosis. His paternal grandfather was a math teacher and camp counselor at the Los Alamos Ranch School before World War II. Peter’s late father John Wirth, a historian, took great pride in the fact that he was born in Dawson, New Mexico, now a ghost town.

When he is not working at the Legislature, Peter is a lawyer in Santa Fe. He graduated from Stanford University in 1984 with a Bachelor of Arts degree in Economics and Spanish and then went to law school at the University of New Mexico where he obtained a Juris Doctorate in 1990. Peter was a law clerk for the Honorable Oliver Seth, a Federal Judge with the Tenth Circuit Court of Appeals. His current civil law practice emphasizes mediation and alternative dispute resolution. 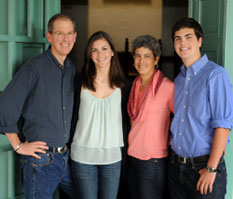 Prior to his service in the legislature, Peter was actively involved in the Santa Fe community. He served on a number of boards including the St. Vincent Hospital Foundation from 1991 to 2000, the Santa Fe Children’s Museum from 2000 to 2004 where he was board chair for two years, the Historic Santa Fe Foundation from 1991 to 1995 where he returned to serve as board president from 1997 to 2003. Since 2000 Peter has been a member of Rotary International.

He is married to Carol Romero-Wirth, who serves on the Santa Fe City Council. They have two adult children, Alex and Elena.